The story of Chicken Supreme starts with its founder, Socrates Lambrinides. Born November 10th, 1945 in Volos Greece, Socrates came to the United States at the age of 10. He graduated from Emerson High School in Union City, NJ and then served one tour in Vietnam with the US Army until 1967.

Shortly thereafter, Socrates met Phyllis whom he married November 25th, 1973. Socrates was a shining example of the American dream. Coming to America with only the clothes on his back, he worked tirelessly in the restaurant business to save enough money to open his own restaurant.

Chicken Supreme has now been serving their loyal customer base for over 40 years with some of the most delicious chicken around. 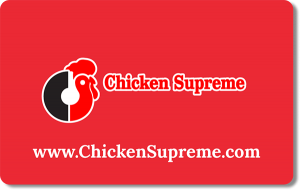 We are now selling gift cards online so you can share your favorite chicken with the people you love! Order online today!